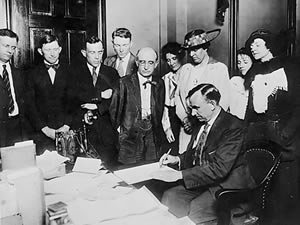 Signing of the 19th Amendment

The early 1900s was a period of unrest for women in America, they demanded equality. One of the most important issues for women was their inability to vote in political elections. The State of Tennessee played a pivotal role in granting women the right to vote; it was the last state to ratify the issue to amend the U.S. Constitution with adoption of the 19th Amendment.

Gaining support for women’s right to vote wasn’t easy. In fact, the effort took many decades of struggle. Abigail Adams, the wife of our founding father John Adams, pushed for women’s suffrage shortly after our country’s founding. She wrote to her husband and other members of Congress hoping they would not dismiss women after winning their fight against England:

“I desire you would remember the ladies and be more generous and favorable to them than your ancestors. Do not put such unlimited power into the hands of the husbands. Remember, all men would be tyrants if they could. If particular care and attention is not paid to the ladies, we are determined to foment a rebellion, and will not hold ourselves bound by any laws in which we have no voice or representation” (Abigail Adams, 1776).

Although the original effort failed, it was one of the first steps toward equality for women. Further efforts included women such as Elizabeth Stanton. She gathered a meeting of over 300 people who marched, lobbied, and even protested for women’s rights. Susan B. Anthony carried forward Stanton’s mission and created the National Woman Suffrage Association and made great progress highlighting women’s rights.

On June 4, 1919, as tensions rose, the U.S. Congress proposed the 19th amendment granting women the right to vote. The proposed amendment was sent to the states. Out of the 48 states, thirty-five of them ratified the amendment. Thirty-six was the magic number needed for the amendment to pass. The scene thrust two states, North Carolina and Tennessee, into the pivotal role of deciding whether the amendment should be adopted because the remaining states either refused or deliberately delayed considering the issue for a vote.

Tennessee ultimately became the final battleground state to decide whether women should be granted the right to vote. The governor called a special session of the legislature to consider ratification of the proposed amendment. The Tennessee General Assembly, along with a young 24 year old representative from McMinn County named Harry T. Burn, gathered at the State Capitol in the summer of 1920 to vigorously debate the issue. When he left home to attend the special legislative session, Harry T. Burn was conflicted. He knew the issue regarding women’s suffrage was unpopular with his constituents.

Many people from around the country descended upon Nashville. The Hermitage Hotel, across the street from the Capitol, became the gathering place for both groups to vigorously lobby and persuade lawmakers. It became known as the War of the Roses; a yellow rose was worn on the lapel if one was in favor of the proposed amendment and a red rose symbolized one’s opposition.

The state Senate swiftly voted to adopt the amendment. It was not so easy in the state’s House of Representatives, however.

After several efforts at passage, the vote ended in a tie. Harry T. Burn’s mother, a widow, had written a letter to her son that asked him to “be a good boy” and vote for ratification. Ten days into the special session Burn voted “yes” on August 18, 2020. And so, the proposed 19th Amendment to the U.S. Constitution granting women the right to vote was passed as a result of a single deciding vote from Representative Burn from the great state of Tennessee. Also known as the Susan B. Anthony Amendment, the 19th amendment declares the following: “The right of citizens of the United States to vote shall not be denied or abridged by the United States or by any state on account of sex.”

We are proud that our office sits directly behind The Hermitage Hotel in Nashville, mere footsteps away from this historic event that occurred 100 years ago today. Our very own Robert Joshua McKee’s father later served in the same seat as Harry T. Burn as the elected representative from McMinn County.

The Dirty Little Secret at the Courthouse! Why Are Truck Drivers Drug Tested?
Scroll to top