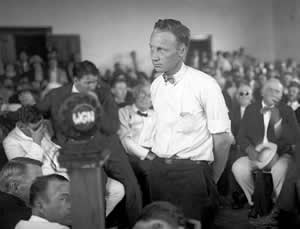 On this day, 95 years ago, one of America’s most famous court cases came to an end in Dayton, Tennessee. Known as the “Scopes Monkey Trial,” it was the first trial to be broadcast on national radio throughout the United States. A criminal indictment issued against a school teacher for the alleged violation of the Butler Act, a Tennessee statute that prohibited any teacher “to teach any theory that denies the story of the Divine Creation of man as taught in the Bible, and to teach instead that man has descended from a lower order of animals.” The entire case was contrived.

The new Tennessee statute, signed into law by Governor Austin Peay, drew the attention of the ACLU. The organization offered monetary support for any person charged with violation of the law. The ACLU and a local coal company executive from Dayton wanted the law challenged. They hoped the United States Supreme Court would take up the result of the trial and declare the new Tennessee law unconstitutional. Local governmental leaders also wanted to bring attention to the town of Dayton. A local substitute teacher named John Scopes was recruited to serve as a participant; Mr. Scopes essentially agreed to serve as the “sacrificial lamb” to challenge the Butler Act. He admitted to teaching from a textbook that presented the theory of evolution. He even persuaded some of his students to testify against him to ensure the case would go to trial. The combined effort succeeded.

On July 10, 1925 the Scopes Monkey Trial began. The case brought lots of attention to the small town of Dayton, it became a spectacle. The trial was so popular that vendors and evangelists filled the town. Monkeys became the overarching theme of the trial. Toy souvenirs of monkeys were hawked on the courthouse lawn. A local soda shop created the “monkey fizz” to commemorate the event. At the time it was known as one the “trials of the century.” 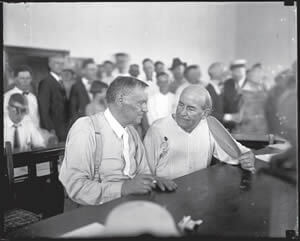 William Jennings Bryan, a three-time presidential candidate, served as the prosecutor. Mr. Bryan joined Sue Hicks, a local attorney and friend of John Scopes, as the prosecutor for the State of Tennessee. Clarence Darrow, another famous attorney, served as defense counsel. Both men were recruited from outside Tennessee to come serve in those roles. The summertime heat was so bad the court proceedings were moved outside. Uniquely, the defense made no effort to prove Mr. Scopes’ innocence, but instead sought to prove the Butler Act unconstitutional because it violated the separation of church and state clause of the U.S. Constitution. Toward the end of the trial, Mr. Darrow asked the jury to find his client John Scopes guilty; he hoped to appeal a guilty verdict with the plan to have the case reviewed by a higher court. The trial jury found Mr. Scopes guilty. The trial judge fined John Scopes $100.00 for the violation and an appeal was taken.

The entire plan almost succeeded, except for one detail. The Tennessee Constitution prohibited any trial judge at the time from imposing a fine greater than $50.00. The Tennessee Supreme Court overturned the guilty verdict and dismissed the case with a recommendation to the state to dismiss the case without further prosecution. The case ended there. No appeal to the United States District Court could be taken.

Well, this is Tennessee. There is always one more story. Years after the trial ended, a songwriter named Shel Silverstein met Sue Hicks in Gatlinburg at a law conference. Shel wrote a song entitled “A Boy Named Sue” that was made famous by Johnny Cash. Yes, the inspiration for the song came about because of the name of the trial’s prosecutor, Sue Hicks.

Before You Stop That Shoplifter The Dirty Little Secret at the Courthouse!
Scroll to top